Msgr. Frank served St. Egbert Parish as pastor from 1986 until his retirement in 1999. He was ordained a priest of the Diocese of Raleigh on December 20, 1958 at the North American College in Rome. He has served the diocese in many capacities including pastor in Smithfield, Southport and founding pastor of St. Mark in Wilmington. He also served as Chancellor of the Diocese and Editor of the NC Catholic newspaper.. 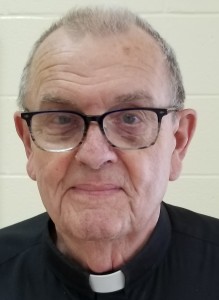